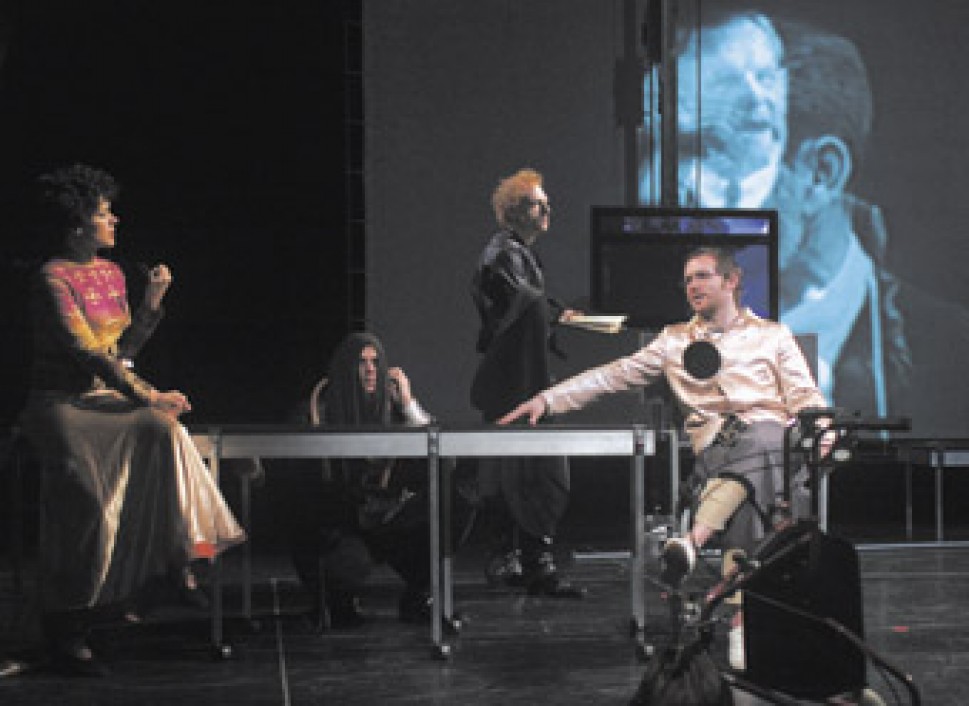 The Wooster Group is shooting a video of HAMLET at The Performing Garage, and we’re opening up the doors at night for public performances.

Seating is limited. Tickets are on sale NOW. Buy tickets »

General admission tickets are $25, reserved seats are $45, and patron tickets are $100 and $250. A limited number of $25 rush tickets will be held for each performance and sold one hour before the show at the door of The Performing Garage.

In The Wooster Group’s HAMLET, Shakespeare’s classic tragedy is re-imagined by remixing and repurposing Richard Burton’s 1964 Broadway production, directed by John Gielgud. The Burton production was recorded in live performance from 17 camera angles and edited into a film that was shown for only two days in 2,000 movie houses across the U.S. The idea of bringing a live theater experience to thousands of simultaneous viewers in different cities was trumpeted as a new form called “Theatrofilm,” made possible through “the miracle of Electronovision.” The Wooster Group attempts to reverse the process, reconstructing a hypothetical theater piece from the fragmentary evidence of the edited film. We channel the ghost of the legendary 1964 performance, descending into a kind of madness, intentionally replacing our own spirit with the spirit of another.

HAMLET is directed by Elizabeth LeCompte and features Scott Shepherd as Hamlet; Kate Valk as Gertrude and Ophelia;Ari Fliakos as Claudius, the Ghost, and the Gravedigger; Koosil-ja as the Nurse; Alessandro Magania as Bernardo and Voltemand; Greg Mehrten as Polonius and the Priest; Daniel Pettrow as Horatio, Rosencrantz, Guildenstern, and the Player Queen; and Casey Spooner as Laertes, Rosencrantz, Guildenstern, and the Player King.

In Performance: Annie Dorsen – A Piece Of Work (Vienna, Austria)