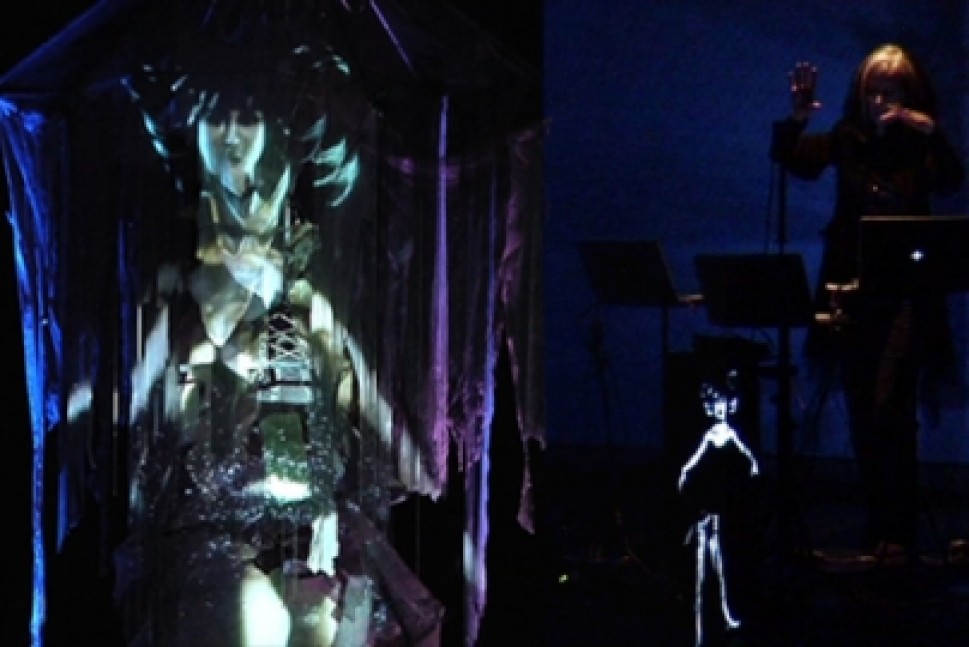 Lucid Possession is a futuristic dramatized song-cycle that unfolds in a haunting display of the admixture of the human and the robotic, the spiritual and the digital. Employing a state-of-the-art motion-sensing system designed by Dove and R. Luke DuBois and an astonishing assemblage of video projections, an unforgettable performance emerges as characters, both live on stage and programmed video avatars alike, interact in increasing intensity to dramatize a contemporary ghost story: a poetic musing on managing the mass of information ‘noise.’ The result is a complex three-dimensional, automated video pop-up book in which the characters – real and virtual – are brought to life through motion, voice, and robotic technology, and the boundaries of the real and virtual are blurred, mirroring our rapidly-changing emotional and cognitive landscape.

Toni Dove has produced hybrid performance, installation and screen based work since the early 1990s that is a fusion of film, game or instrument based interaction, and experimental theater. In her work, performers and participants interact with an unfolding narrative, using interface technologies such as motion sensing, iPad and laser harp to “perform” on-screen avatars. Dove’s work has been presented in the United States, Europe, and Canada, as well as in print and on radio and television. Her projects include interactive installations: Archeology of a Mother Tongue, (virtual reality) at Banff Centre; Artificial Changelings:premieres: Rotterdam Film Festival, USA; Body Mécanique at the Wexner Center for the Arts, Ohio; Spectropia, a feature-length live-mix movie performance, at Lincoln Center, Scanners, the New York Video Festival 2006; Cleveland at the Ingenuity festival 2007; premiered: Wexner Center for the Arts; REDCAT, LA Nov 2007; the Zero1 Festival of Art on the Edge, San Jose, 2008, EMPAC, Troy NY, 2008, the Kitchen, NYC, 2010, Roulette, NY, 2012.

Dove was appointed to the 2000/2003 Government Advisory Committee on Information Technology and Creativity, National Research Council, USA. She is the granddaughter of American abstract painter Arthur Dove.