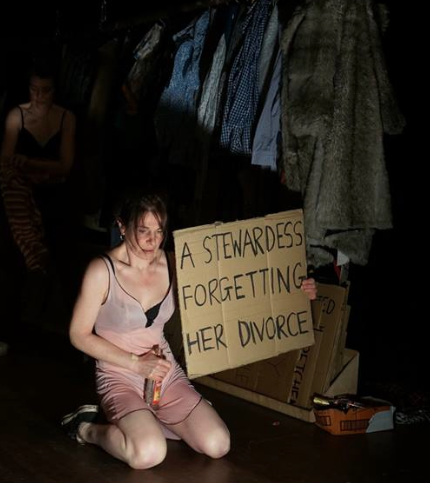 In 12 am: Awake & Looking Down, five silent performers endlessly reinvent their identities using stacks of cardboard signs with which they name themselves, and a store of jumble-sale clothing (coats, dresses, suits, anoraks, trousers, pyjamas) from which they dress and re-dress. This catalogue of names range from LOST LISA and VALENTINA TERESHKOVA to ELVIS PRESLEY (THE DEAD SINGER) and THE MAN WHO WENT TOO FAR. The piece lasts anywhere between 6 and 11 hours and — as in other durational works by the company — the audience are free to arrive, depart and return at any point.

12 am… is a physical and visual performance that explores the relation between object and label, image and text. 12 am… also functions as a kind of narrative kaleidoscope as the named figures, in different combinations, share space beneath the backdrop of electric stars. The piece plays on the growing exhaustion and inventiveness of its performers as they create new stories or juxtapositions between characters.

12 am: Awake & Looking Down was developed from material first used in the company’s theatre performance Emanuelle Enchanted (1992) and is the first durational work created by Forced Entertainment.

The complete list of characters/signs used in 12 am… is published in Certain Fragments.

© Forced Entertainment 1993. 6 to 11-hour durational performance.The audience are free to come and go as they please.