By Caden Manson (Editor In Chief)on May 6, 2014
Comments Closed 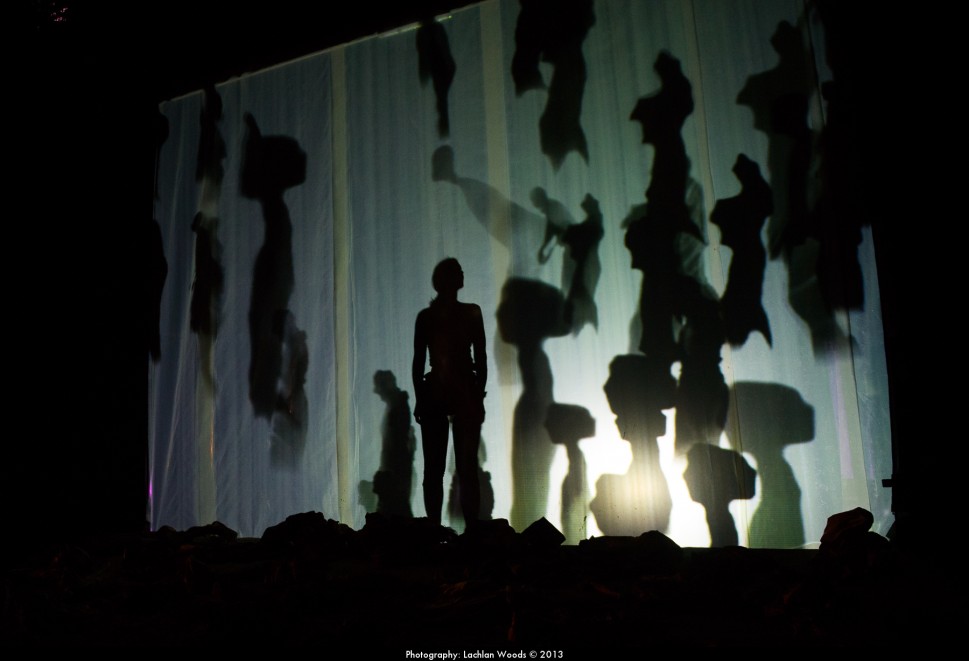 KaBooM is a physical performance event – its subject is War. KaBooM is based on real stories of ex-soldiers who have fought on the frontline: Fabrice, a child soldier from Burundi, who hid in lakes to escape machetes wielding hoards; Majid, who deserted after 10 years in Saddam Hussein’s army; Ivor, who, as a 16 year old escaped the Holocaust to fight for his family in the Pacific Islands along with a guardian monkey. Each of the 7 tales serves as a basis for 7 leading theatre directors to create a theatrical response – using the body of one female performer and an arsenal of contemporary theatrical weapons – projections, aerial work, pulsing sound track. Like a contemporary Scheherazade this performer functions as the central storyteller, adding an original feminine perspective to the tales of ‘Men at War ‘ by assuming complimentary and companion roles in the story telling: the war widow reading a last letter from the heat of battle; the waiting mother; the daughter brought up with the constantly hovering ghosts of war. KaBooM positions the audience, as witness, into the midst of the performance arena. They are placed in a metaphorical field of war, populated with visual imagery and the debris of battle. Spectators are led to discrete performance areas. There is no fourth wall – the sense of involvement and engagement is direct. KaBooM is both deeply personal and universal – stories of the real lives of ordinary people plunged into extraordinary circumstances. As you read these words there is a war going on in several corners of the globe.

Bio: I work in contemporary physical/visual/installation performance. For four years I was a core member of Entra’cte Theatre in Sydney devising new works, which toured regularly. During this time I trained in the theatrical language of Decroux and also Suzuki, with whom I trained with in Japan (I have taught Suzuki method for many years). I have since made my own physical and visual contemporary performance works. The process is a collaborative one and I have worked with many key members of the performing arts community – both Australian and international performance makers. The works have toured nationally and internationally to festivals and theatres. Highlights include the Festiwal Szekspirowski (Gdansk, Poland), Melbourne, Brisbane, Sydney and Adelaide International Festivals, Marsh Theatre (San Francisco), Theater J (Washington DC), Toga Festival (Japan), Magdalena Aotearoa Festival (New Zealand), Sydney’s Carnivale Festival, Performance Space and Belvoir St. Theatre, Searchlight Festival, Melbourne’s La Mama and Bekkett Theatres, The International Women’s Playwrights Festival in Athens, Greece, and an Australia Council residency in Israel to research Israeli theatre. My work uses the multiplicity of theatrical/performance languages to explore life, identity and humanity in the contemporary world. The works aim to draw the audience into the performance event – making them active participants, rather than passive spectators. The theatrical construct is used to allow audiences to absorb the themes – sensorially and viscerally.