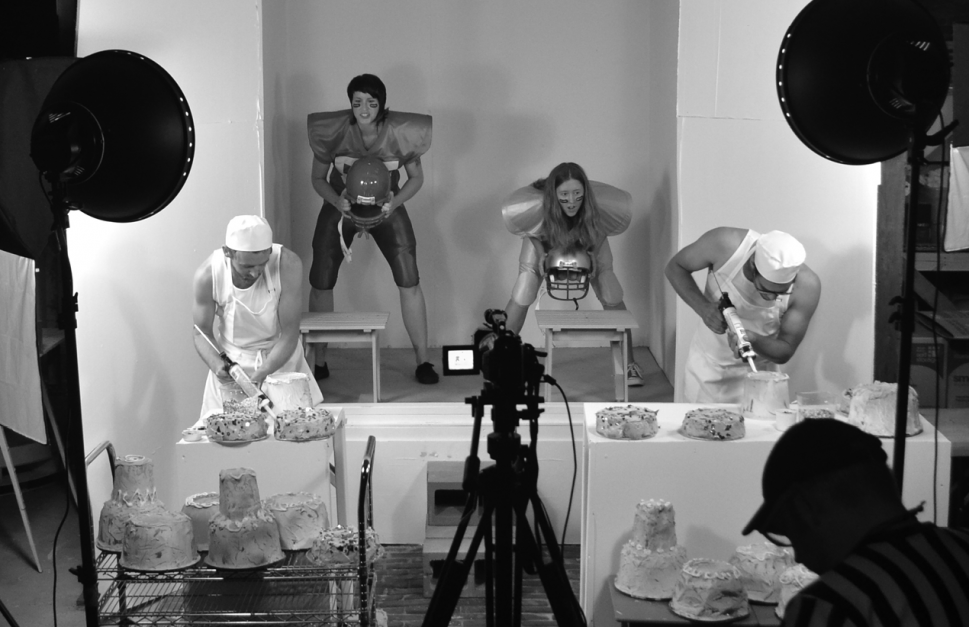 My work situates itself in the areas of intersection between post-dramatic theatre and sculpture; time-based media and installation; and video and performance art. Pre-recorded and live-produced video elements interact with built and modified objects, environments, and performers. Events further the evolution of the delineated space of performance activity, linking the ethereal spaces of the close-circuit networks and live-streamed video to that of the dimensional space of the live performance. Harebrained investigations into the nature of the media juxtaposed in the combined space of performance/installation/exhibition seek to understand our contemporary sublime through the development of object/environment/technology interaction. The cockamamie and the structural collaborate to form an absurd choreography of space/time/action, simultaneously courting and resisting a relationship with narrative inquiry; simultaneously highlighting the plasticity of the performance as a content delivery system. Often considered are the ontologies of popular and performance-based forms of human interaction including sport and folk dance alongside the development of performance-based content delivery systems such as popular theater and cinema. Systems of communication are explored as they are folded into each other: typography into sculptural form; information design into costume design; choreography into stop-motion animation; and vice versa.

INFERNAL CAKES / ADJACENT MANIAS is a multimedia performance representing a hybrid of folk dance, early cinema, televised cook-offs, collision sports, and video games. The piece explores the following popular forms of performance-based human interaction: the cakewalk and its evolution a from a cathartic lampooning of plantation society dance into a county fair ceremonial game of chance; the square dance and its relationship as a variation on dances of similar origin including the Quadrille; the live-telecast football event; the cooking-based time management video game. The piece uses two channels of projected video, mixed live, alternating between the live and the pre-recorded, and interacting intermittently with the live performers. The videos serve to propel a (loose) narrative while the live action is movement based and oft relies on chance and competition. Live movements include hybrids of cheerleading moves, square dances, football practice exercises, cake decoration and related forms of vernacular ornamentation, and silent cinema slapstick. Archetypes are reconfigured as sport-dance or sport-domesticity hybrids are created. Genders are swapped on a frequent basis between performers. Power relations are challenged through the hybridization of form and the reconfiguration of the function of gender in the narrative. Emphasized is the plasticity of both the proffered performance and its dissected precedents.