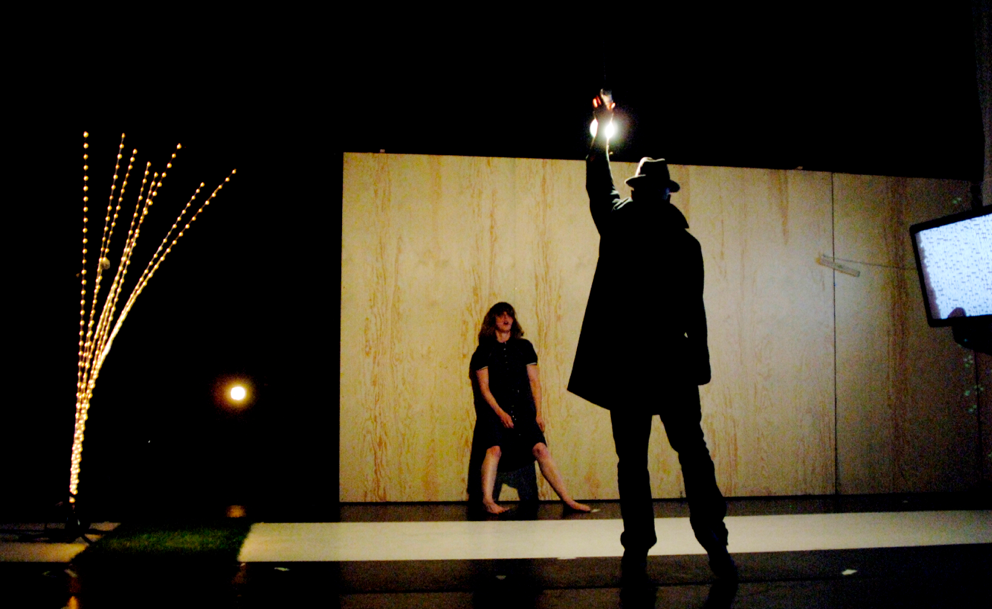 “fractured bones/ let’s get lost” is an energetic performance meditation on disappearance and presence. It takes the Flitcraft parable about a ‘disappearer’ from Dashiell Hammett’s “The Maltese Falcon” and Jean-Luc Godard’s futuristic classic “Alphaville” as a starting point to investigate the idea of object permanence and performance while picking apart hard-boiled motifs to create a dialectic between the present and the future, the interior and the exterior. The performance is set across a landscape of projections and trashed video monitors revealing a discourse between the natural and synthetic.

How was the group Findlay/Sandsmark formed?
3 years ago we started making work in Norway, where we are for the most part based, after developing a mutual admiration for each other’s work and my personal desire to work outside a typical experimental or devised theater practice. The idea of working with a dance artist (Marit Sandsmark) and a musician (Pål Asle Pettersen) seemed very freeing from a lot of the trappings I had backed my way into in making theater/performance pieces. I find a freedom in movement and music based work, that includes concepts and forms that are looked down upon in typical theatrical or dramatic frames. It is also a goal for us to work on a project by project basis with freedom from wrote or codified sets of principles, and the ability to invite other artist in to collaborate project by project. For instance, in ‘fractured’, it has been great to be able to invite in and work with Eric Dyer and Victor Morales.

What was the impetus for developing fractured bones/ let’s get lost?
We became interested in some of the dialectics we have set up with the natural vs. the synthetic, presence vs. absence or disappearance, interior vs. exterior, and then other material and ideas flowed from there.

What brought you to the The Flitcraft Parable?
We became interested in this looping idea in our daily human patterns and the desire or impulse to want to disappear from all of our things or typical ways. And how this relates to the Godard film Alphaville, where there is a dialectic set up between the circular thinking of the technology, and the idea that all one needs to do to be a free human is to ‘follow that which you love in a straight line.’

What are some of the performative problems you encountered making this new piece?
We have been using improvisational approaches in developing the text and movement, and it has been a challenge to stick with it and persist in a way that didn’t suck. It is a challenge, especially with regards to text to find things that are sustainable or somewhat repeatable in dynamics. For instance, during the development we were using dictation programs to make written artifacts of textual improvisations with an idea to have something to reference or riff on, and it is very difficult to not fall into the trappings of the lame side of improvisation or ‘jamming’.

Do you have plans to show it further after the Performing Garage?
Yes, we are also showing it in Trondheim, Norway at Avant Garden at the end of September, and some other dates are in the works.
http://www.avantgarden.no/en/program/fractured-bones-lets-get-lost/

Whats is up next for Findlay/Sandsmark?
Marit, Pål Asle, and I are doing a study for our next large scale piece as part of the dogma project at Oktoberdans in Bergen at BIT at the end of October. http://bit-teatergarasjen.no/sesongprogram/oktoberdans-2012-findlay-sandsmark-pettersen-usa-norge-dans-til-folket-a-pretty-shitty-study/
Then we will premeire the full piece, <<last year was pretty//shitty>> (which Young Jean Lee is collaborating with us on, making some films) at Black Box Teater in Oslo at the end of January 2013, with performances at BIT Bergen in February and then in Stavanger.

Findlay//Sandsmark is a Stavanger, Norway based performance company working across the disciplines of dance, theatre, live music, and video art. They have made two large scale performances- “now and nowhere else” (U.S. Premiere: Performance Space 122, 2010) and “fractured bones/ let’s get lost” which was presented by Oslo’s Black Box Teater as part of the Ultima Festival, as well as Tou Scene in Stavanger. “fractured bones/let’s get lost” will also be presented at Teaterhust Avant Garden in Trondheim, Norway at the end of September.

Their new project, “biograph- last year was pretty/shitty”, a collaboration with artist/performer Joe Truman and playwright/director Young Jean Lee, will premiere in early 2013, and is co-produced by Black Box Teater in Oslo, BIT Teatergarasjen in Bergen , and Tou Scene in Stavanger. Findlay//Sandsmark will create a short piece for the DOGMA project as part of Oktoberdans, the international dance festival at BIT Teatergarasjen in Bergen in Fall 2012.