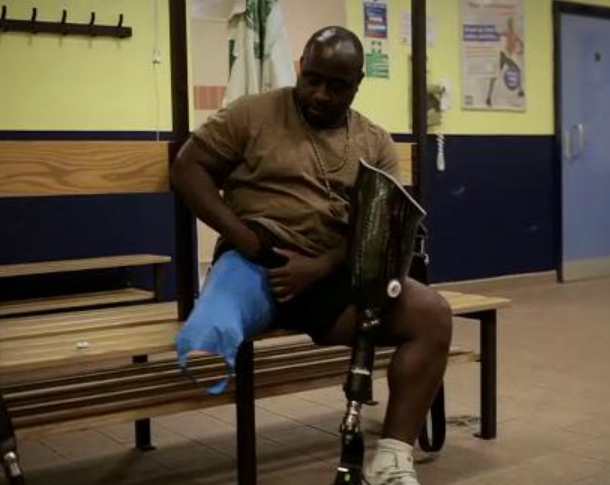 Using residents of areas in London that are only served by one mode of transport, the 343 bus Larsen’s film shows different perspectives on the people who live within these communities. The film tells the stories of a number of residents living on the estates in Camberwell and Peckham, focusing mainly upon notions of community, loneliness and Isolation.

The film loops a number of different clips the order of these clips is never repeated. Meaning that you can feel as though you have seen the full loop of the film when, in fact it is the same clip being replayed. It is unclear to me why the director made this decision; perhaps it has something to do with the order in which the bus travels.

The film allows us the chance to see the way in which people who are on this bus route live; there is a very voyeuristic feeling about it. Watching and seeing how other people live. As they tell us their story, we watch and we listen. The way that the back of the gallery has been opened up into a big window and shows the estate and the rest of Peckham as if it is being displayed as a piece of art gives me a mixed response. It is slightly unsettling it feels almost like people are being objectified.

However, there are other sides to the film. It allows people to have a voice and gives them the opportunity to tell their story in whatever way they wish. There is a hope that the project has bought the isolated members of the community closer together and that the notion of community has been re connected. Unlike other projects that are ‘socially engaged’ this one does not seem to be trying to fix something. This raises the question of what is the function of this type of work? Is it simply enough that these people are given the opportunity to have a voice and to tell their story?

Caution has to be taken when art is being made in this way, where people are the subject of the work. Artists have to be careful not to patronise and not to impose on people’s lives or to enforce their ideas onto other people. There is an argument as to where these types of practices should be placed, if in fact they should be considered art at all?

There is a talk at the end of the month that focuses on the theme of socially engaged art taking place at Chelsea College of Art.

Chris Green (London, UK)
My work explores the potentials of privately sited performance that takes places within the public sphere. I am interested in the use of site as a medium for creating work and the notion of creating work which is a result of an examination of urban 'texts'.