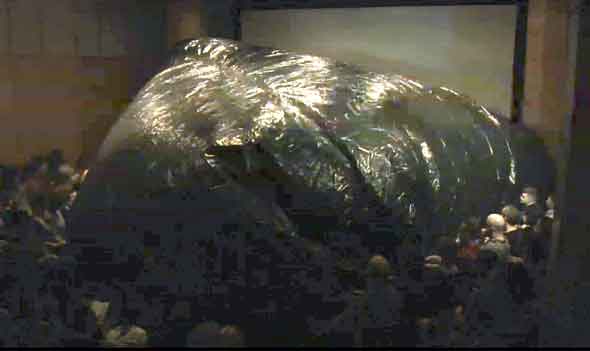 This past Wednesday – Friday October 3-5, 2012 Contemporary Performance Network was a critical partners for the annual PRELUDE 12. NYC Regional Editors engaged with PRELUDE and are now following up with their first person responses. These Regional Editors are Kathleen Amshoff, Esther Neff, Raul Zbengheci, and Emily Bercir Zimmerman. In the next few days we will post each of their responses and continuing the conversation in the comments section. Below is Raul Zbengheci’s response to the opening night manifestos.

About Raul Zbengheci (Brooklyn, USA)
Raul Zbengheci is inspired by monolithic social housing left over after the Communist regime in Bucharest. These are buildings that speak louder than anyone who inhabits them, they are buildings that create visions and ghosts for anyone surrounded by them. For Collectif Experiencia, he uses these memories of monumental constructions to create stage spaces that serve as speaking skeletons, superficial and waiting to be filled by bodies and movements that will redefine the spaces themselves. When considering the stage, he uses light to redefine and reconstruct the space with the idea that a precise structure on the outside can allow for greater abstraction within the limits it has imposed. Zbengheci is also a photographer and writer. In photography, he uses the same ideas he expresses for the stage, composing spaces rather than capturing them. His first book, Tryin’ to Find Another Place, is in final revision. The project nicesentences aims to find a style of writing detached from context and minimal, visceral as well as aesthetic. He lives in New York where he is the Editor-in-Chief of Connectom, LEIMAY-CAVE’s online artist network and publication. He is also the co-founder of Collectif Experiencia.