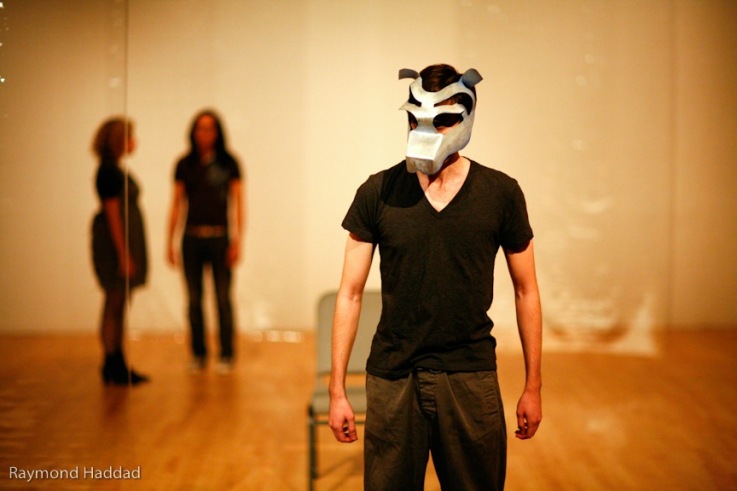 Every week the members of Contemporary Performance Network vote to spotlight one member.
This week’s Member Spotlight is The Nerve Tank (NYC, USA)

Bio: Founded in 2006 by Melanie S. Armer and Chance D. Muehleck, The Nerve Tank is an incubator for theatrical performance. We collaborate with actors and designers in a spirit of artistic adventure, and our rehearsal methods lie outside the traditional models. We combine elements of popular culture, mediated image, and physical presence to test lines of engagement between spectator and live event.
Based in New York, we have staged works at Theatre for the New City, chashama, the New York International Fringe Festival, Dixon Place, The Tank, and Pittsburgh’s Flux Festival. From 2008 to 2010 we were the resident theatre company of the Brooklyn Lyceum.

1. Can you tell us a little about your work, your history and your performative concerns.

I used to be what you’d call a playwright. I wrote plays. I molded them and sanded them and sent them off to sea. But I started thinking about what I really enjoy seeing, and not only in theatre but in other mediums as well. You know, music and dance and architecture have been moving along with the world, while theatre lags behind like a stubborn old accountant. That’s starting to change; there are companies here and abroad that are creating new models for themselves. The Nerve Tank was founded in 2006 by me (Chance Muehleck) and my partner, Melanie S. Armer, to make things we wanted to see.

The most involving work for us is that which approaches the uncertain. We start with questions and we end with better questions. I don’t think art has any duty. It’s one field of human endeavor that’s freed from utilitarian goals. This idea seems to drive some people crazy, though. If you tell someone that a woman named Marina Abromovic is sitting in the atrium of the MoMA gazing at people all day, they’re liable to lose their minds. I suppose they wouldn’t care if she weren’t being supported by the museum. But what are the four stages of a radical idea’s progress? Ignorance, derision, assault, and acceptance. It’s kind of a loop.

Our new show is called Opal. It’s a piece for five voices that explores the dynamics of family and the roles of memory and language therein. The text is an assembly of found material, riffs on “the canon” (O’Neill, Wilder, etc.), and half-recalled conversations. Much of it overlaps, like a chamber piece, and our sound designer Stephan Moore is developing a rhythmic sort of patterning for it. Most of the movement is scored with gesture, which is a technique we often revisit. As a company we fully admit the presence of the audience and the givens of the performance space, so we’ll be addressing those aspects as well. Opal runs at Incubator Arts Project April 28 – May 7. Tickets are here: https://www.ovationtix.com/trs/pr/791835.

The Attendants is a project we created in residence at chashama. We’ve been invited by Arts>World Financial Center to present it at The Winter Garden in May. I guess it’s best described as an interactive performance installation. The main set piece is an 8’ plexiglass cube; two people move inside it and viewers can text messages via their cell phones or wireless devices. The messages appear on flat screen TVs that surround the cube. There’s also a webcam element that will connect audiences remotely from anywhere in the world. The Attendants runs May 12 – 14 from 12pm to 6pm each day, and all shows are free. The presenter’s website is here: http://www.artsworldfinancialcenter.com.

3. What are your biggest performative obstacles for yourself in this new work?

Scheduling. Really, getting all the performers in the room together is a ridiculous challenge. It’s more a concern for Opal than for The Attendants. The cube requires certain physical parameters that can be rehearsed with available bodies. But Opal is more organic, meaning that each performer needs the others to move forward. Someday we’ll have everyone on lucrative contracts so they need not make these awful job/work choices.

I have to mention two. The first is Jan Fabre’s Prometheus: Landscape II at Montclair State. A bold, jagged, rip-snorting production. He leaves a lot of negative space in his mise-en-scene, which is beautiful because it gets filled with the energy trailing behind the performers and with the audience’s perceptions of all that is coming at them. This rough approach makes everything very present, very striking. With Prometheus, I think Fabre marries myth with postdramatic form in totally punk rock ways.

The second is Christian Rizzo’s b.c, janvier 1545, Fontainebleau. which I saw at The Kitchen. Things are so focused and physically precise in his work (or at least in this one). He’s dealing with negative space in movement and intention more than in stage picture. For me, the perfect moment is when Julie Guibert joins Rizzo behind a table of candles and they simply float there, quite still, with the music rising and rising. Time explodes, you’re aware of everything and nothing at once, and then it’s over.

Oh, I also enjoy the many pieces of reality programming furnished by Fox News.

For More Video And Pictures, Go To Nerve Tank’s Profile–>