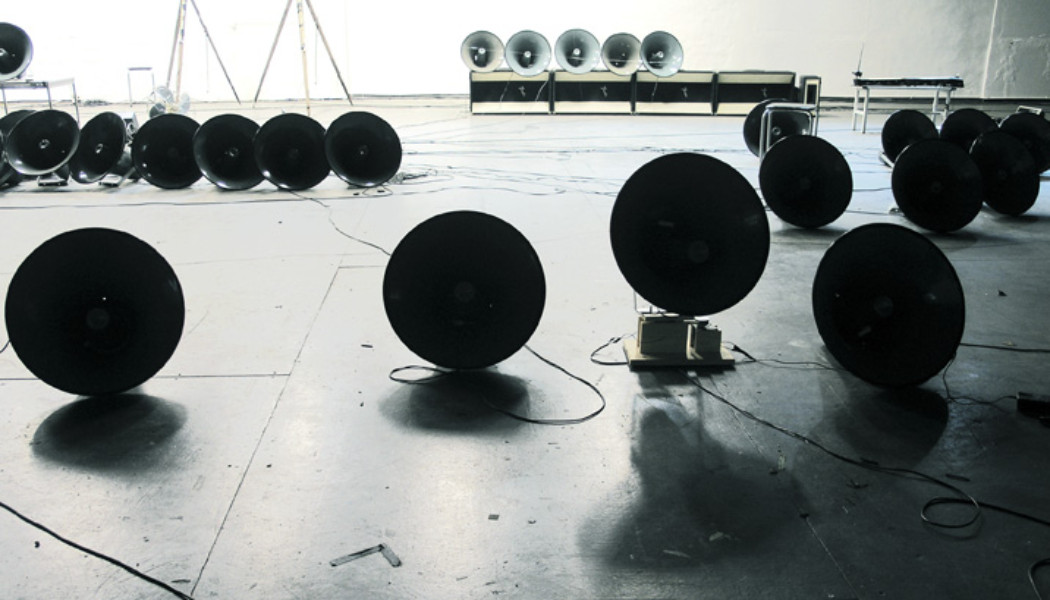 Based in Oslo and led by Lisbeth J. Bodd and Asle Nilsen, Verdensteatret has long had strong ties to the European, especially German, theatrical tradition that includes Brecht, Walter Benjamin and Heiner Müller. Following experiments in fields such as visual performance, environmental theater and text-based theater, the group has recently tended toward the ambitiously interdisciplinary. Today, Verdensteatret consists of video artists, computer animators, sound engineers, musicians, artists and a painter, among others. They collaborate in what they call a “flat structure” where “everyone has a hand in with everything.”

A telling orchestra is rigged on a rusty wire and a tidal wave of pictures and sounds is thrown at us by a machine so fragile that it is in constant danger of short-circuiting. Among a pile of megaphones that hurl sound in all directions, and a knot of wires so stretched that they may break at any moment, we glimpse people. People who are trying to interact with this landscape, tugging at strings that are everywhere in the room. The strings hanging from the ceiling form the stage for a mass of figures. A mechanical puppet play takes place here – over the heads of the human figures. louder is a storytelling orchestra that hangs by a rusty wire and narrates a multitude of tales through sound and images. Tales from a distant past, tales from our time, about wars, river, the theatre, the nation, music, nature, technology, the journey and about exile. In the midst of this throng, we find a heart of darkness – a long, black barge on the open sea, radiating coldness and stories.

“FORTELLERORKESTERET” (“The Telling Orchestra”) is a “live” room-installation that can be described in many ways: An audio-visual composition where rusty mechanics meets new technology on the backside of a “video-shadow-theatre” on Greenland. A machine, a polyphonic instrument, or a whole orchestra with many voices and tunes,mutating shapes and interwoven stories. An electro-mechanical construction that functions as an audio-visual “animation-machine”or a mechanical figure-theatre machinery, where images, sculptures, sound and video is deeply integrated into each other to form an audio-visual-spatial composition.

By use of computer controlled motors and robotics the primitive wooden construction of old weather-beaten planks has become
an automatized sculpture-machine with the ability to in a second, totally transform the space in radical ways.

“CONCERT FOR GREENLAND” is an audio-visual composition where rusty mechanics meet new technology on the backside of a “video-shadow-theatre” on Greenland. A performance/installation where visual art, sound, video, installation, text and theatre try to unite into one composition.

The background for “Concert for Greenland” is a journey Verdensteatret made to Greenland and other north-Atlantic islands in 2003.
Greenland as the focus point of this work is, as often before, a result of an intuitive attitude towards use of artistic material and the fact that research on travels has worked very well for us on several occasions earlier. The material is based on travels and research around the Northwest-Atlantic countries from august till November –03. -Greenland, Iceland, Faeroe Islands -and Norway.
In the further working process in Oslo all the material collected on these trips went into a deeper artistic process that in the end “sweat out” a poetic concentrate. The longest stay was in Greenland and has obviously made a deep impression on us since so much of the material we ended up using comes from our travels there. The ambivalent impressions we often felt during our stay in Greenland has changed into deep fascination. “Concert for Greenland” reflects this journey on several levels simultaneously.
On the first level it mirrors the actual trips (specially Greenland). But the structure and artistic expression of the performance is more like images and sounds from the subconscious experience of these Nordic journeys, rebuilt through our dreams or our unreliable memory. On still another level its an expedition through a sound-scape, through language and visual transformations.

In May 2001 the company travelled from Kiev via Odessa and crossed the Black Sea to Istanbul. This journey is the bakground for the new production. Much of the material collected through this journey, in the shape of video- and sound recordings, pictures and recollections are forming the landscape – a kind of afterlandscape, after the storm – of TSALAL.

One of the main “themes” is the exploring of the auditive dimention, crossing the borders between pure sound and meaningful language. This is mainly achieved by advanced real-time processing of the performers voices. The audible effects on their voices encapsulates the whole spectre; from mild forms of distortion to total transformation. These processes are in part controlled by the actors, in part by a computer-technician. The performance can be experinced as a musical composition or as a “3-dimensional painting”, or both at the same time.

“RÉGLA” is a vigorous collection of sensuous material. Scenic pictures arise from the white installation/room, cutting the minimalism and attracts attention with its organic forms. Surrealistic furniture-like forms covered with shells and corals in heaps as if retrieved out of the ruins of an abandoned manor or shipwreck. Video pictures of traffic-filled streets and graveyards are projected across the white furniture forms and create dark shadows that move the scenic images. Whenever sound, light and image melt together, the scenic picture breaks loose from the performers’ control and transform the stage to a steaming and breathing organism. Régla conveys clear references to visual arts. The loose dramaturgy causes the eyes to coincidentally dwell upon elements of the image and shakes up the interactive relationship between audience and performer. The audience observe the performers as they construct the images. In Régla an intercultural landscape is reconstructed. Musical movements and historical textmaterial melt together into a theatrical hybrid of cultural elements and historical events. The material moves across large geographical areas and transform history and tradition. Words are thrown out and return as echoes of colonialism and war, revolution and freedom. Funny images turn to torture and abuse in visually explosive scenic images. In Régla Verdensteatret moves from the more analytical focus of earlier works and opens up for sensory depths with layers of information that the audience must decode on their own. (excerpts from articles and critics)